Discover the Farasan Islands Reserve with its picturesque nature

When you book with an account, you will be able to track your payment status, track the confirmation and you can also rate the tour after you finished the tour.
Sign Up
1634
Including Transportation, Lunch, hospitality and tour guide
Availability : 1 day
DetailsItineraryEvaluation

An amazing tour in the Farasan Reserve, which is one of the largest protected areas full of endangered animals, Among the most important are gazelles, goats, white-tailed ferrets, rodents, turtles, and dolphins, Coral reefs, In addition to the eagles, And gray swans, And the dark gull, And heron, And the sunset falcon, And other water, shore and migratory birds.

A tour to enjoy the most wonderful natural views of the famous Al-Qandal forests in Jizan, Which is a destination for every seeker of charming beauty, as it is distinguished by its vital location on Farasan Island to be a tourist destination par excellence due to its rich natural resources. During our tour, we enjoy spending time watching the waterways in the middle of this forest, which has become a charming bay with hundreds of bird species.

A fun tour between the palms and the water. Inside a village with a history of 9 thousand years in the heritage village of Al-Qassar, which is an ancient village located on Farasan Island, It includes nearly 400 houses built of stones and palm leaves. According to historians, the history of the village dates back to the Roman era. It also includes writings and drawings, some of which date back to the Himyarite era, While the village is the largest palm oasis in the Farasan Islands and is characterized by its abundance of wells

An exploration tour of the castle and the place is a huge cave indicating that it is the ruins of an ancient castle built on a hill overlooking the southwestern coast of the island. The effects of this castle are still evident in a surprising way in how those stones were raised

Enjoy the end of the tour with an enjoyable visit to the heritage village in Jizan, where originality and heritage are mixed with the nobility of the present as it stands tall to embody real pictures of the various environments of the Jizan region and to show its heritage and civilization in the pages of history. The heritage village of Jizan symbolizes as a civilizational landmark for a period of time in the region’s ancient history linked to its prosperous present. In the village, the region’s past appears to be visible in vivid images and heritage patterns that symbolize the cultural and civilizational diversity according to the region’s environment and terrain through an integrated panoramic interface of the region’s history with its environments, culture and distinct civilization since ancient times. 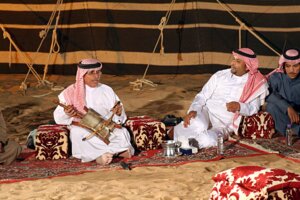 From1,125 ﷼1,089 ﷼
The price decreases when the number increases 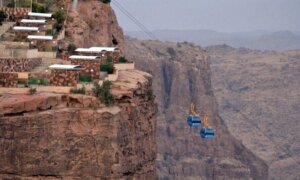